For millions, Wolfman Jack was the master of ceremonies for the rock 'n' roll generation of the '60s on radio, and later on television during the '70s. In the early 1960s, when much of the airwaves were segregated, Bob Smith created his shadowy wild man alter ego so that he could DJ on the radio the "rhythm and blues" race records n he loved so much. As the enigmatic Wolfman Jack, the young white man from one of Brooklyn, one of New York's toughest neighborhoods, could easily hide behind a voice that masked his true ethnic roots. Many teens first discovered The Wolfman while scanning the AM radio band as they cruised Main Street U.S.A. Out of the night came a howling, guttural, ethereal voice amid a collection of rock 'n' roll, inner-city ethnic rhythm, and deep south blues records that wouldn't be found on any "legal" radio station. 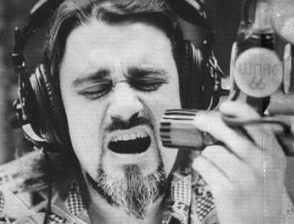 Indeed, Wolfman Jack held Court over his young audience from XERF-AM, just south of Cuidad Acuna, Mexico, where the 250,000 watt signal – five times more powerful than any U.S. radio station – blanketed most of North America. Without the benefit of traditional advertising, it was word of mouth that spread the news about the provocative Wolfman and his nonconformist style – the kind of style that horrified parents, making it all the more appealing to a growing legion of young followers. But the Wolfman Jack story began much earlier, in 1949, when radio reached through to a troubled youngster. As the Fifties arrived and rock 'n' roll music found its way into suburban America, Bob Smith imagined himself behind the mix spinning the turntables, and taming that jive DJ talk. His over-the-air heroes, black and black-influenced DJs like Dr. Jive, Jocky Jack, Professor Bob, Sugar Daddy, and others spoke to him, taking him to a secret place – away from the pain of still growing up – off into a world of music unlike anything his family could understand.

The Wolf will return on the Mighty KBC